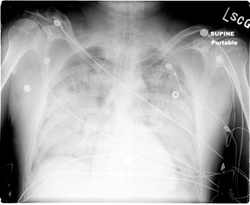 Heart failure affects at least one in 100 people in the UK and is a common reason for admission to hospital. Heart failure has a worse prognosis than many cancers with about 40% of people dying within one year of diagnosis. Most of these people had severe heart failure and the prognoss of people with mild to moderate failure is better.

What are the symptoms of heart failure?  When the heart doesn't work efficiently or is damaged, people notice fatigue and shortness of breath. They may also notice ankle swelling also known as oedema. Sometimes people feel especialiy short of breath when they lie down because of fluid congesting the lungs. As heart failure gets worse, the level of oedema gets higher until sometimes the legs are completely swollen, as is the abdomen and lower back.  These symptoms often develop gradually and usually go unnoticed for a long time because the heart doesn't fail totally or suddenly stop Often there are periods where the condition is fairly stable interspersed with episodes of acute worsening of symptoms.

What causes of heart failure? Anything that damages the heart can weaken its ability to work properly. The most common cause is coronary artery disease, where the arteries supplying the muscle of the heart become narrowed. The person may experience chest pain. Heart failure may begin with a heart attack, where part of the heart muscle is weakened by a sudden blocked coronary artery, leaving a scar in the heart.

Many cases of heart failure are caused by high blood pressure which causes the heart's muscular wall to thicken, making it less flexible and unable to pump blood properly.  Other causes include damaged heart valves, alcohol abuse, and some hormone problems. Sometimes the cause of heart failure is not known and we called this ideopathic.

How is heart failure diagnosed? The symptoms of heart failure are common to other medical problems specific tests are needed to confirm the diagnosis. These include a chest X-ray, an electrocardiogram (ECG) to detect any abnormal heart rhythm, and most importantly, an echocardiogram. This is a special type of ultrasound that shows how well the heart and its valves are working. In addition, blood tests will be performed and blood pressure must be measured.

How is heart failure treated? Heart failure can be treated with lifestyle adjustment and medication. Drugs such as angiotensin-converting enzyme (ACE) inhibitors and angiotensin receptor blockers (ARBs), improve prognosis.  The goal with treatment is to control a person's symptoms (poor energy,  breathlessness and swollen ankles), prevent these problems getting worse and allow them to get on with their life. There are some things patients can do to help reduce the risk of heart  failure.  It's vital to treat any possible causes of heart failure, such as high blood pressure. There's little point in treating the symptoms if you don't treat the cause. Not smoking, taking regular exercise, drinking a sensible amount of alcohol and eating a healthy diet with plenty of fruit and vegetables are essential. Many medicines can help people with heart failure enjoy a fulfilling live. Symptoms can be improved using diuretics (water tablets), while ACE inhibitors have been shown in studies to improve life expectancy. In the past, medicines called beta blockers were never used to treat heart failure because they were believed to be dangerous. However, research has found that some beta blockers are not only safe to use but can be beneficial. For some people, other more invasive treatments may help, such as surgery to  replace damaged heart valves, coronary artery bypass surgery or even a heart transplant.