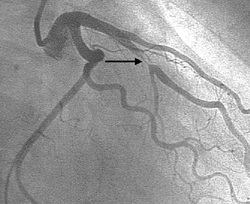 Developed by Mason Sones in the 1950's coronary angiography is regarded as the gold standard test for the diagnosis of coronary artery disease.


Most cases are performed by a radial artery (wrist) approach. After infiltration of a small amount of local anaesthetic into the wrist a small tube (sheath) is passed into the radial artery. Through the sheath a catheter is passed up the arteries of the arm to the heart and then a small amount of contrast is injected into the coronary arteries which supply the heart muscle. During the injection an X ray picture is taken which allows the cardiologist to see if there are any significant narrowings of the arteries.

The Accordion Effect: A complex stenosis was observed between the 2 stents in the LIMA. Administration of intracoronary glyceryl trinitrate had no effect. This lesion appeared when the LIMA was straightened by the guidewire so it was assumed to be a pseudo lesion. The pseudo lesion disappeared after the guidewire in the guiding catheter was pulled back as shown in the video.  (Muller et al., Circulation 1998)